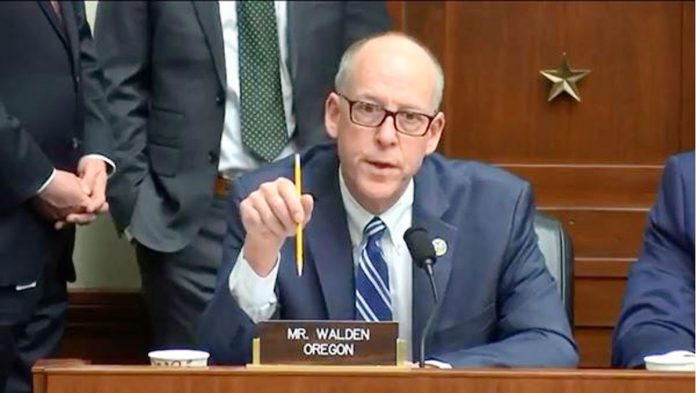 WASHINGTON, D.C. — Representative Greg Walden (R-Hood River) penned an op-ed in The Washington Examiner in response to the deadly fires in Oregon and the need for modernizing forest management policies. So far this year, fires have burned over one million acres in Oregon. Over the weekend, Walden brought Federal Emergency Management Agency (FEMA) Administrator Pete Gaynor to Jackson County to view the devastation from the fires and meet with local officials.

An excerpt of Rep. Walden’s op-ed is below. The full article may be viewed here.

How much more has to burn before Congress fixes forest management?

There are no words to describe the devastation and loss I saw as I toured the towns of Phoenix and Talent, Oregon. Lives were shattered as deadly fires merged to incinerate thousands of homes and apartments.

Elsewhere in the state, massive fires burning nearly three acres per second laid waste to forested communities. And for the towns that were lucky enough to avoid the fires themselves, residents choked on the toxic smoke these fires produced, as we endured the worst air quality in the world all across the Northwest.

To put in perspective the vastness of the smoke, during my drive from near Baker City, Oregon, to Medford, Oregon, I navigated through smoke so dense you could only see 30-50 feet ahead at times.

After seeing the disaster firsthand, I flew to Sacramento to meet up with President Trump and show him photos of the devastation in Phoenix and Talent. Trump committed to me that his administration would do all it could to help us recover and rebuild. He signed off on Gov. Kate Brown’s major disaster declaration request within a day. Additional resources are now on the way to the state of Oregon to help individuals affected by these fires.


While I am glad the federal government is swiftly providing aid to millions of Americans affected by fires in the Pacific Northwest, with over a million acres burned in Oregon just this year, we must do more to prevent these fires from happening in the future. We shouldn’t be forced to choke on smoke and watch our homes, our towns, and our forests burn to the ground every summer.

Wildfires are nothing new. They are a part of nature, but what Oregon and most of the Pacific Northwest is facing this summer is unprecedented.

While climate change is a factor, decades of fire suppression and broken federal forest management policies have left our forests overgrown and waiting to burn. Forests are not static — they grow, die, and burn. In Oregon alone, the amount of timber in our national forests increases through growth by over 50% every year. The result is unnaturally dense forests that fuel increasingly catastrophic wildfires.

We must do better.

In 2018, I helped lead Congress to pass into law some of the most extensive forest management policy reforms our nation had seen in more than a decade. We provided additional tools and funding to the Forest Service to more quickly implement critical forest management projects.

The Trump administration is taking advantage of these tools, and progress is being made toward improving the management of our federal lands. The U.S. Department of Agriculture has shown that since 2016, the Forest Service has increased the area treated to prevent wildfires by 20%.

Despite this progress, the Forest Service estimates at least 63 million acres of our national forests, including 7 million acres in Oregon, are at high risk of wildfire and in need of active management. We must do more and fast. That’s why I’ve worked closely with my colleagues to write the Resilient Federal Forests Act of 2019. This legislation provides thoughtful, science-based tools to forest managers and streamlines fire prevention projects so we can get our forests back in balance. When fire does strike, it would ensure we clean up the burned, dead trees where appropriate and while they still have value, and replant a new, healthy forest for future generations.

It’s time to listen to science and pass policies that reduce the risk and size of forest fires. Even the United Nation’s climate panel said forest management should be part of our plan to address climate change by reducing emissions. We need to better manage our forests, update our infrastructure, and promote clean bio-mass energy. The Nature Conservancy and U.S. Forest Service found that active forest management could reduce the size and intensity of wildfires fires by 70%.

We must do more to get our forests back into balance, reduce the risk of wildfire, help them recover quicker after fires, and help our forested communities thrive. Democrats in the House should stop blocking the bipartisan Resilient Federal Forests Act from getting a vote in the House. It’s time to get these commonsense policies into law. Let’s save our forests and our communities, improve public health, and reduce emissions.

Here in the Pacific Northwest, the skies may have cleared for now, but if Congress doesn’t act soon, we will face another summer of fire and destruction in 2021.