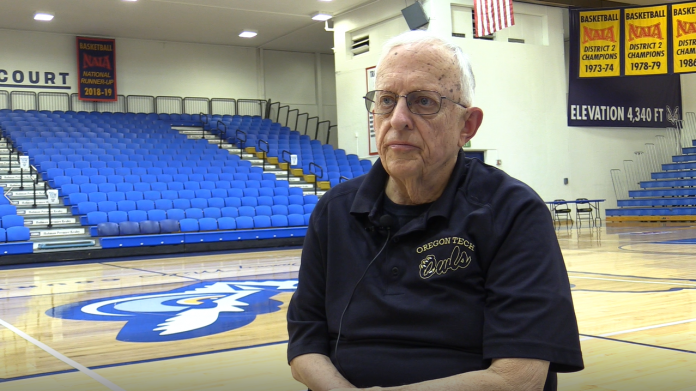 KLAMATH FALLS, Ore – For three decades one man has welcomed us to “Danny Miles court on the campus of the Oregon Institute of Technology in Klamath Falls.” He is Bobby Thompson. Bobby has always invited into the broadcast, always making us feel like a friend.

The Oregon Tech Owls finished the 2019-20 season 24-6(14-6) and are fighting for a spot in the National Tournament. At the end of the year, Tech will lose Mitchell Fink – the All-Time leader in points scored (2117) and assists (865). The Owls lose Tyler Hieb, Seth Erickson, and Jordan Henderson, too.

Bobby Thompson is used to seeing guys come through the program. After all, he has been the ‘play by play’ announcer for 30 years at Oregon Tech.

“We don’t want them to go,” Thompson said before letting out a laugh. “It’s a great Senior class. One of the best ever.”

Over the years, Thomson has seen three national titles, two national runner ups, and nearly 20 Cascade Collegiate Conference titles. He, without a doubt, still loves his job.
“I love it,” he said. “The camaraderie. Both men and women are great. All the athletes here are special.”

Thompson has worn many hats over the years. He was the sports information director and stepped down in 2007 after 14 years.

“I’ll go to Medford and Bend and occasionally Redding and that’s about as far as I’ll go. I started playing when I was 13. When I wasn’t working, I was playing Bridge.”

As Bobby’s 30th anniversary with Tech came and went on January 2nd, he still fondly remembers his favorite moments. All of the National Tournament games stand out of course, but it was a preseason game he says is his favorite.

“There was a team from Georgia called Life University,” Bobby said, gearing up for a great story.

Oregon Tech used to host Southern Oregon and four other teams for a tournament in December. They wanted to invite Life College of California but ended up inviting the Life University of Georgia. Life University responded to the invite quickly. The kicker – they were an NAIA Division 1 school.

“We looked at the book and we realized ‘Oh my gosh they won a National Championship in NAIA Division 1.’ They were coached by and All American who played in the days of Oscar Robertson,” Bobby exclaimed. He began to talk faster, getting excited to finish the story. “They came out and played six years in a row and the two times we beat them, they won National Championships.”

Bobby remembers one of the times the Owls won. It was his favorite game.

“Four of our starters have fouled out and our bench was playing. One was our ‘Rudy’ of basketball. He was a Freshman or Sophomore but he was fouled and hit the free throws that won us the game. Life University won the National Title that year and we were the only team to beat them. That has to be the most exciting game I was ever a part of.”

Bobby is always a part of our favorite memories with Oregon Tech Basketball. Sometimes when an official makes a questionable call he will say ‘The coach didn’t like it and neither did I!’

“Always get the coach involved first,” he said with a chuckle.

It seems that the biggest thing to Thompson is the community.

“I love the whole picture up here at Oregon Tech. It’s great to see the students come back. When the alumni come back it is really a great thing.”

Bobby likes to talk about the community at Oregon Tech. It’s more than just camaraderie and fun, it’s friendships. It may be just the folks he works with and the people he knows. But it is every Oregon Tech fan. Everyone part of Owls Nation. Everyone who tunes into the broadcast.

We are all friends with Bobby Thompson.

Here are pieces of the interview with our friend Bobby.