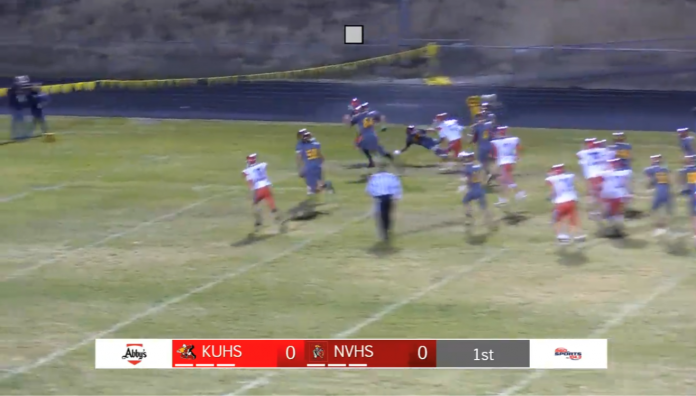 KLAMATH FALLS, Ore – KU played the best defense they have all year and still fell to North Valley 29-26 on Friday Night. Darius Holmes played his heart out and yet, they still took the long drive back over highway 140 with a loss.

It came down to one untimely turnover, and two failed 2-point conversion attempts. And we all saw that you can play 46 minutes of great football, but it can be those final two that seal the deal.

The game started just as the Pels wanted it to. With a 35 yard Darius Holmes Touchdown run putting them up 8-0 after converting with 2 points.

North Valley answered with their own weapon, Senior running back Drew Hanson, who scored on back to back Knight drives.

Holmes then showed his prowess at the receiver spot bringing in a 24 yard pass from Junior QB Aaron Franklin.

The squads traded blows in the second half and KU trailed 29-20 heading to the final 12 minutes.

The Pels and Holmes struck quick in the 4th bringing the Pels within three with nine minutes to go. The Pelican defense played he best it could and capped it off with a Jaymus Dutra interception with five minutes flat to go. All KU had to do was drive down field and knock down a field goal to force overtime. But in the final two minutes, NV answered with their own interception and that was it.

The Pelicans scratched and clawed for 46 minutes and slipped in the final 120 seconds of football. It was heartbreaking.

The group showed so much heart, grit and toughness throughout the game. You can look back and think that maybe they should have kicked a few PAT’s after Touchdowns but even so they still would be down by one. One timely turnover can make or break the game.

Now KU switches focus to the Canal Bowl. The biggest game of the year. If they can upset Mazama, who is coming off of a 55-21 loss to Marist, the season can be salvaged.