ESPN – In his previous start, Seattle Mariners lefty James Paxton had a chance at history. He struck out 16 batters through seven innings, giving him a chance to tie or even break the single-game record of 20. Instead, with his pitch count at 105, he was finished for the night and then watched his bullpen blow a 2-0 lead.

On Tuesday in Toronto, he made history, with a little help from his friends behind him, especially third baseman Kyle Seager. Paxton tossed the sixth no-hitter in Mariners franchise history, blanking the Blue Jays on 99 pitches and striking out seven in a 5-0 victory.

The final batter of the game was Josh Donaldson. Paxton threw a 98 mph fastball up and away that Donaldson swung at and missed. The next pitch was 100 mph on the inside corner — the fastest pitch Paxton has thrown all season — for a called strike two. After shaking off catcher Mike Zunino, Paxton delivered his final pitch at 99 mph — the second-fastest pitch he has thrown all season — and Donaldson hit a hard grounder to Seager, who made a nice snag for the final out: 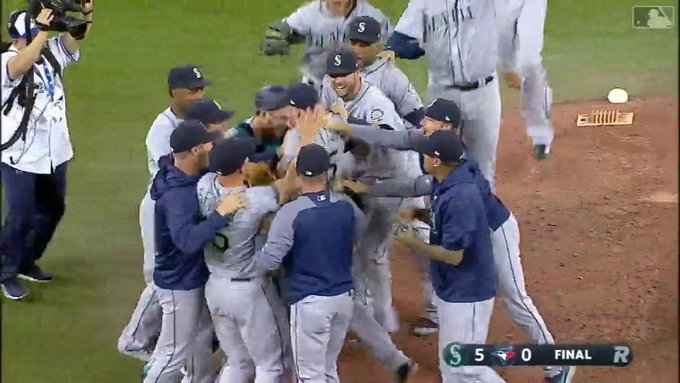 THAT’S how you finish a no-no.

That wasn’t even the best play Seager made on the night. To end the seventh, he made a spectacular diving stop to rob Kevin Pillar of a double down the line, then made a rapid-fire no-look throw to get Pillar, with Ryon Healy making a nice scoop. The play had a hit probability of 41 percent, according to Statcast, but that doesn’t factor in Pillar’s above-average speed, which added much more difficulty to the play: 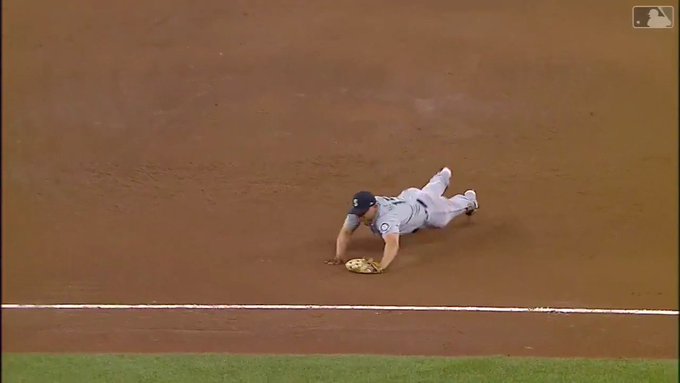 Kyle Seager’s going to get a nice steak dinner from @James_Paxton.

Paxton became just the second Canadian to throw a no-hitter, joining Dick Fowler, who threw one for the Philadelphia Athletics way back in 1945. While the British Columbia native grew up much closer to Seattle than Toronto, it was special for Paxton to do it in his home country.

“Of all places, here in Toronto, it’s pretty amazing,” he said as teammates drenched him with blue Gatorade in his postgame interview. “The fans were giving me some trouble in the seventh inning, but once I got past that, they started kind of cheering me on. It was cool. I mean, what a defense tonight. Those guys were making every play. I made a few pitches, got lucky a bunch of times — it was just our night.”

Indeed, after Seager’s great play to end the seventh, Ben Gamel ran down Russell Martin’s drive deep into left-center, making a leaping grab against the scoreboard. Kendrys Morales then lined the next pitch hard to center field but right at Dee Gordon. Paxton fanned Lourdes Gurriel Jr. on 98 mph heat to end the eighth, got Anthony Alford to foul out to right field on the first pitch to start the ninth and blew a 97 mph four-seamer down the middle past Teoscar Hernandez for the second out.

Paxton’s velocity is his calling card, especially for a lefty. His average fastball velocity in 2018 is 95.4 mph, eighth-best among qualified starters and tops among lefties. He was the hardest-throwing lefty starter in 2017. His ability to ramp up the fastball as the game progressed is a reminder of how Justin Verlander did that back in his MVP season in 2011. Courtesy of Kenneth Woolums of ESPN Stats & Info, check how Paxton worked the Blue Jays with his fastball velocity:

Coming off an excellent 2017 season in which he went 12-5 with a 2.98 ERA and 156 strikeouts in 136 innings, Paxton had a disappointing April, with a 5.12 ERA. With Felix Hernandez no longer an ace, Paxton is clearly the team’s best starter, even if Felix still drew the Opening Day assignment. Now it looks like Paxton is getting on a roll. He struck out 10 in six innings two starts ago, then struck out 16, then pitched a no-hitter. “Just trying to challenge guys with my stuff instead of trying to be so perfect picking at the corners,” he said.

When he gets going like this, Paxton can be as good as any pitcher in the game. He started 2017 with scoreless outings in four of his five starts. He had a 1.37 ERA in six starts in July. He also had two DL stints, however, and made 24 starts, though that was a career high. The Mariners are off to a 20-14 start, hanging in the tough American League West race with the Astros and Angels, but they need Big Maple to make 30 starts.

The best part of this no-hitter for Mariners manager Scott Servais was that he never had to sweat Paxton’s pitch count. In fact, with 99 pitches, it was just the 12th no-hitter since 1988 — when we first have pitch data — with fewer than 100 pitches, out of the 75 individual no-hitters thrown. Five times this season, a starter has been pulled after six innings of no-hit ball.

Paxton’s was the third no-hitter of 2018. He joins Sean Manaea of the A’s and the Dodgers’ combined no-hitter in Mexico just a few days ago. If you can’t keep track of all the no-hitters, that’s understandable. There have been 35 this decade, the most in any decade.