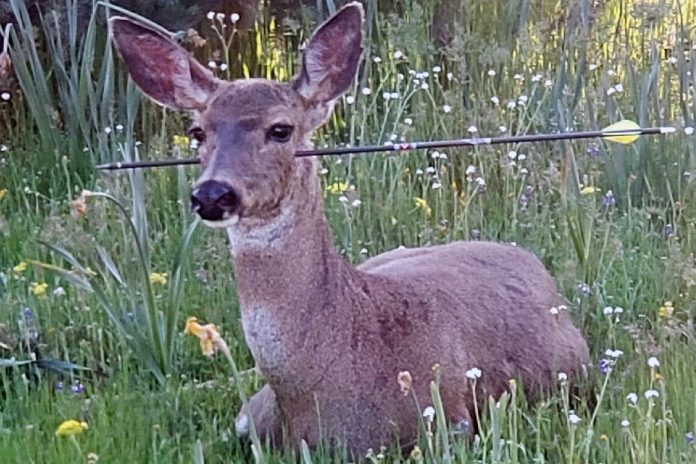 Oregon State Police and the Oregon Department of Fish and Wildlife are investigating after two deer have been found with arrow wounds in Southern Oregon.

On April 27, 2018 Central Point Fish and Wildlife Troopers were called to the Shady Cove area to investigate a live deer that had been shot with an arrow which was still stuck in the deer.

The troopers and ODFW responded in an effort to investigate and possibly tranquilize the deer to be able to remove the arrow. Information learned was that the deer was able to feed and walk around. They were unable to locate the deer. A trooper responded later that evening and found not one, but two deer that had arrows protruding from them. The injuries to the deer did not appear to be life threatening. Investigators later learned that there might actually be a third deer with an arrow stuck in it.

A reward is being offered by the Oregon Hunters Association through the Turn-in-Poachers (TIP) program for any information leading to an arrest in this or any other wildlife case. Callers can remain anonymous. The TIP program number is 1-800-452-7888.

TIP rewards can also be given for the illegal taking, netting, snagging, and/or dynamiting of salmon, steelhead, sturgeon, and/or large numbers of any fish listed in Oregon statute as a game fish.

How to Report a Wildlife and/or Habitat Law Violation or Suspicious Activity: